May 7, 2017
The 60th Anniversary of Hudson Memorial Presbyterian Church, where Philip Hayden serves as Director of Music Ministries, was celebrated with a concert: Hudson Creates!  The concert featured music composed and orchestrated by Philip for chamber orchestra, bass, drums, piano, handbells, and choir.

October 31, 2016
Baritone Brandon Bell will perform the set “Ere Sleep Comes Down” on a graduate recital at the University of Tennessee at Knoxville.  Brandon is from Norfolk, VA and studies with Professor Andrew Wentzel.  He has been a young artist at Wolf Trap and has sung several summers with the Janiec Opera Company of the Brevard Music Center.  He will be joined by collaborative pianist Eileen Downey, who serves as a vocal coach at UTK and a rehearsal pianist at Knoxville Opera.

September 3, 2016
You can now purchase Philip Hayden’s vocal art songs on this website!  Please visit the Vocal Art Songs page to see the catalog, and select individual songs or sets for purchase details.  Should you have any questions about scores which are currently out of stock, please feel free to be in touch through the contact page.

January 17, 2015
“Ere Sleep Comes Down,” a free concert of art songs by Philip Hayden, was held at The National Opera Center in New York City on Saturday, January 17th, 2015 at 7:00pm.  This was the composer’s NYC debut, and included six wonderful musicians.  The program featured the Grammy nominated, Met roster baritone Sidney Outlaw in the world premiere of “Ere Sleep Comes Down,” a set of six songs with poetry by Paul Laurence Dunbar. 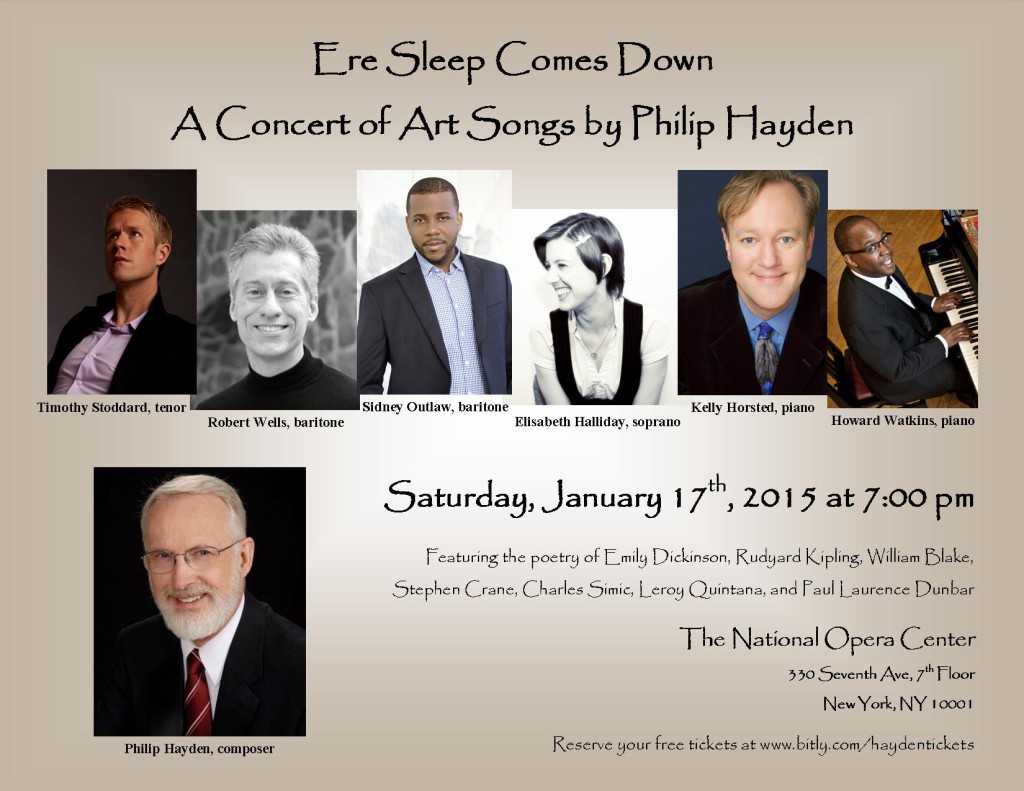 June 22, 2013
Three of Hayden’s art songs (A Summer’s Night; Aye, Workman; and ‘Tis This – In Music) are performed by Karen Hayden and Radha Upton in a Faculty and Guest Artist Recital at The Music Academy of North Carolina in Greensboro, NC.

March 12, 2013
Confession (Importune Me No More) is performed at the King College Music Department concert, “All Music Was Once New: The Gifts of Current Composers.”

February 12, 2013
Philip Hayden’s tuba and piano arrangement of Salt of the Earth, composed by Andy Scott for tuba and brass band, is premiered at the University of North Carolina at Greensboro by doctoral candidate Andrew Smith.

January 2013
Beyond the Years, for SATB choir, is performed by the Ward Melville High School Camerata.

September 30, 2012
‘Tis This – In Music is presented by Karen Hayden and Radha Upton in a Faculty and Friends Showcase Recital at the Music Academy of North Carolina in Greensboro, NC.

July 1, 2012
Philip Hayden’s Voices is premiered by the Princeton Singers in Washington, D.C. as part of the culminating performance of the ACDA Choral Composers Forum hosted at Lehigh University.

June 30, 2011
Tenor Kelly Burns performs Poem for Salt, If All the World Were Paper, and The Voice of God in an Artsongs Recital presented by the Chautauqua Opera Company’s Young Artists Program.  Emily Jarrell Urbanek, Head of Music Preparation at Opera Carolina, accompanies.

May 24, 2011
Choral Arts of Chattanooga presents Fear No More and Sigh No More, Ladies in the concert “A New Look, a New Sounds.”

February 10, 2011
Tenor and doctoral candidate Kelly Burns presents the world premiere performances of Poem for Salt, If All the World Were Paper, and The Voice of God at the University of North Carolina at Greensboro.

July 2008
As a winner of the University of Miami Frost School of Music at Salzburg’s performance competition, Karen Hayden gives the European premieres of Mary, Pity Women; Song of Summer; and ‘Tis This – In Music.

April 2008
The Mallarmé Chamber Players and the Hudson Festival Choir, conducted by Philip Hayden, present Hayden’s setting of Psalm 67, as well as the world premiere of And Peace Will Come, a sacred cantata for SATB choir, soloists, and chamber orchestra.  CVNC writes that “Philip Hayden’s setting of Psalm 67, beginning as a bright, intensely rhythmic work and shifting to a slower, more contemplative mood, is an excellent melding of the psalm text and Hayden’s music, and his orchestral and choral writing.”  “The highlight of the evening’s concert,” as the review states, “was Philip Hayden’s cantata And Peace Will Come.”  The various movements are described as being “quietly joyful” and “exciting,” and the orchestration is labeled “excellent.”  For the full review written by Martha A. Fawbush, visit http://cvnc.org/article.cfm?articleId=2031.